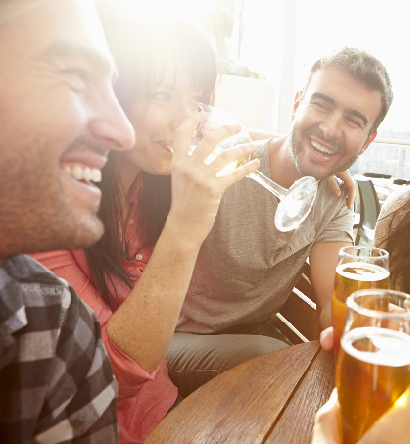 In the Middle Ages, chinking jars often meant some beer slopped into other jars, and anyone not having chinked jars was suspected of having laced the beer. For fear of getting poisoned, some did without chinking jars and didn’t appear trustworthy themselves. Emperors, kings etc. also feared being poisoned and had their own taster.

Here's looking at you, kid

Looking people in the eyes while chinking glasses also hails from the Middle Ages. Anyone looking into your eyes couldn’t signal others to poison you, at least not with his or her eyes.

Why putting down the glass again, after having chinked glasses?

It cancels out the chinking. When the Bavarians had to chink glasses with the Prussians, they disassociated themselves from them by putting the glass down again. But another story is that this custom goes back to monks who found the jar to heavy to drink from it and had to use both hands, after chinking jars with only one.

Agreeing over a drink to use "Du"

This custom seems to indicate that a shared drink can commit you to each other. 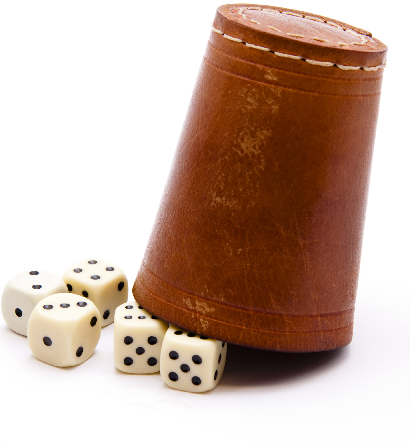 Number of players: 3 – xxx, Utensils: 1 dice shaker, 2 dice, 1 beermat. Game: roll the dice in clockwise rotation. The higher number is a 2-digit number, the lower 1 digit. Two of the same are a double, only to be beaten by a Mäxchen, a 1 and a 2. You always have to roll a higher number than the person before. But the dice stay hidden and only the roller himself/herself knows his/her number and will tell it to his/her neighbour. If the neighbour doesn’t believe it, he or she can check. If the roller has lied, he or she has to take a drink; if he or she hasn’t, the person having made the check must. If a Mäxchen is uncovered, all people have to drink twice. The new round always starts with the loser.

Number of players: 2 – 10, Utensils: 20 plastic cups with beer, a table-tennis table, a table-tennis ball. Game: on each half of the table put 10 cups, forming a pyramid, and fill them with beer. Form 2 teams of the same number of players; one for each half of the table. The ball is thrown alternately into a cup of the team opposite. If a team scores, the other team has to drink the cup. Whoever has run out of full cups is the losing team.

Number of players: 2. Utensils: beer bottles and bottle caps/beer mats. Game: the players stand 2 metres apart with a bottle in hand each. Each opened bottle is crowned by a bottle cap/beermat, which is to be hit by the opposite party’s tossed bottle cap/beermat. The player whose bottle was thus hit must take a sip from it. The winner may try again. If he or she scores again, the opposite party has to take two sips and so on and so forth. An empty bottle indicates the loser. 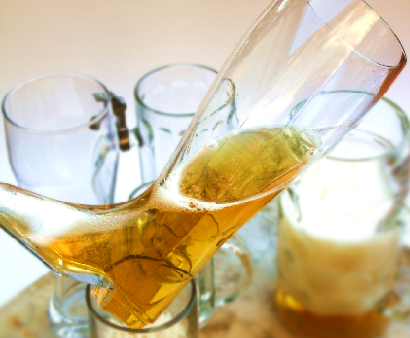 One Maß (1 litre) is filled with water or beer. The jar is held at shoulder height with your arm stretched. Nothing must overflow. If you get weaker, you are out. The winner is who lasts longest.

Stiefeltrinken means a boot-shaped glass is passed around. The difficult thing is that because of a vacuum having formed you cannot really take a sip as soon as there is only beer left in the bottom part. But you can avoid the vacuum by evenly turning the glass while drinking. If you don’t, you will get a splash in your face. There are a lot of local rules, e.g. that the last one pays for the next round and that he or she who gets the splash in the face has to drink up.

Nothing for the weak, this Bierkrüge schubsen. It’s all about dexterity. You shift or shove a Maß as close as possible to a defined target.

Eichbaum beer’s exceptional quality cannot only be told by its taste but also by its certificates. The Deutsche Landwirtschaftsgesellschaft e.V. (German Agricultural Society) DLG) is one of the most important food-rating organisations, whose beer tests attest to Eichbaum’s quality and its corporate culture. And the International Food Standard (IFS) annually confirms...

Most important in brewing is the combination of tradition and technology. After all, beer has been produced from four ingredients in accordance with the German Purity Law for five centuries now: malt, hops, yeasts and water. The balance between traditional brewing and state-of-the art technology makes Eichbaum brew beer that is not only unique but also of top quality – a real market leader...

Eichbaum was founded in 1679 as a small brewpub, and while the exact location changed, its domicile has always been Mannheim. Its traditional art of brewing in accordance with the German Purity Law dated 1516 guarantees Eichbaum beers’ top quality – since 1679.

Experience more than 335 years of brewing live! See how crystal-clear water and select regional ingredients are turned into prize-winning Eichbaum beer specialities. And conclude the 3h-tour with a nice little snack and two of your favourite beers from our historic cellar. Or check it out here and now on a virtual tour.