Monks as pioneers of Apostel Weissbier

Monks, like the old apostles, were commissioned as messengers with the proclamation of the faith. „Ora et labora“ - the monks should pray and work in their monasteries. The work also included the practice of craftsmanship, with some of the monks in each monastery becoming specialists in brewing beer. It was considered a staple food in the early monasteries - especially as „liquid bread“ during the fasting period, since it was not broken by beer consumption. The brewing monks were able to constantly develop and improve the production of beer through their reading and writing skills. In the monastery breweries, they laid the foundations for the brewing industry as we know it today. One of the most important changes in the monastery brewery was the use of hops as a seasoning for beer. This is made the beer more durable and gave it its slightly bitter aroma, which is still present today.

A church reference to this tradition was obvious and so it was in 1713 that the Apostelbräu was brewed for the first time in Worms. A brand that was later taken over by the Werger brewery and finally became part of the private Eichbaum brewery. Apostel Weissbier now follows this tradition and history.

Apostel Weissbier conveys a traditional and authentic beer sentiment as an ambassador for German beer culture. The yeast-fruity and sparkling beer speciality from Southern Germany is unique in the world and embodies top quality „made in Germany“.

Apostel Weissbier is pleasure - like a ‚sip from heaven‘: Full body, recent effervescence and a balanced malt body result in a composition of wheat beer that turns even monks into ‚little sinners‘.

Apostel Weissbier, brewed with ‚divine assistance‘, conveys a piece of good, old craftsmanship and a grounded, unspoilt world - after monastic care and the quality of traditional manufactories. The brand Apostelbräu has a long and successful history dating back to the year 1713. Apostel Weissbier enjoys a worldwide presence and popularity with the brewing expertise of one of the largest and most award-winning Weissbier brewers in Germany.

The best ingredients - various types of malt from their regional origins, sun-ripened wheat and the finest yeast - are brewed in elaborate and affectionate work according to the Bavarian purity law for the Apostel Premium Weissbier. They turn our Apostel Weissbier into a genuine premium product.

The precious ingredients are blended at 76 degrees Celsius during the seven-hour brewing process and cooked with special care by our skilled brewers. After the prolonged fermentation period of six days, the beer ferments for more than three weeks in the storage cellar to produce our delicious and malt-intensive Apostel Premium Weissbier. A luminous, amber-coloured appearance rounds of the profile. A sip of heaven - cheers! 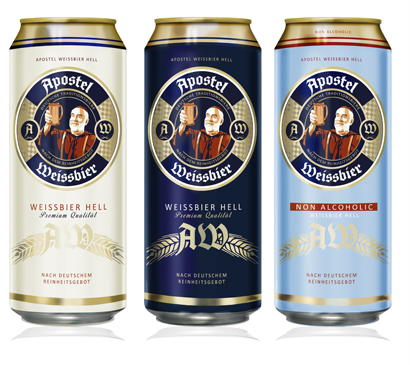 The international Eichbaum product range shows an elegant packaging design, signifying both traditional brewing processes and a modern brewing and bottling technology plus the beer’s German origin. It is indeed all these factors that allow Eichbaum to brew such a wide range and produce so many different trading units. Our many bottom and top-fermenting beer specialities are made from select regional ingredients. And thanks to its technical know-how, Eichbaum is one of the most innovative breweries in Germany.

Karamalz has been the classic malt drink for more than 50 years now, enjoyed by many consumers of whatever age. What is special about Karamalz Classic is its unique taste and natural ingredients, healthy carbohydrates and caramel malt. Thus, Karamalz is deliciously malty and ideal for the whole family. And then there are its successful advertising campaigns....

It is the combination of many decades of brewing experience and state-of-the-art technologies that allows Privatbrauerei Eichbaum to produce such a huge number of beverages. Its range includes bottom-fermenting beers like Pils (pilsner), Schwarzbier (black beer), Premium Lager and Leichtbier (light beer) and top-fermenting beers like Hefeweizen hell or Hefeweizen dunkel (pale and dark wheat beer). And we use always use select ingredients and various brewing processes, which also makes for this huge variety....